Welcome to Drone Journalism Review, a blog series about all the issues surrounding drone technology. Today we’re going to be looking at the overall ethics when it comes to drone journalism specifically in relation to concerns of privacy and surveillance.

Consider the controversy that surrounds drone warfare. The technology itself has enabled huge damage to human life that can be caused by a simple remote control. Removing the human element from warfare has been a paradigm shift in the last decade of attack and defense. No longer do we have to be in the trenches with our enemy. Now our government can kill in mass numbers by simply pressing a button miles away. In the same vein, reporting on something from a remote location does inspire the same uneasiness, because it means that anyone with a drone can access your image and track your whereabouts.

Drones inspire up a lot of ideas and notions, and in the public eye, those are mostly nefarious. Let’s set the record straight though. Ethics in drone reporting is a loaded topic with a loaded sense of journalistic responsibility and ethics driving it forward. Reporters are not going to be using their drones to spy on you, in your home, doing private things everywhere and anywhere. Not any less so than ordinary citizen journalist catching a cameo of you in their smartphone-recorded video. Technology has forced a kind of transparency and accountability for everyone.

According to Matthew Schroyer of the Professional Society of Drone Journalists, there is a code of ethics to be observed that is founded in the philosophy of psychology Abraham Maslow’s layered concepts. 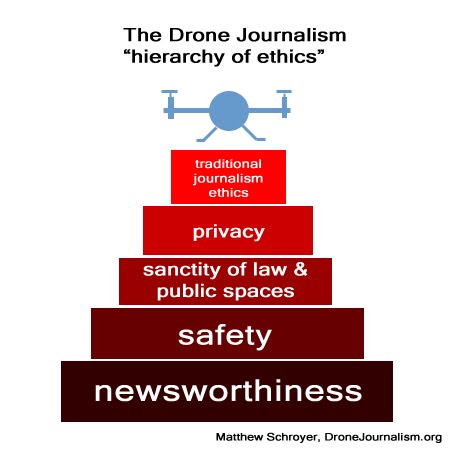 In the United States, the FAA is enforcing more defined regulations about what it requires to operate a drone. The once grey area is gone. The FAA has given a few licenses already, one of which to media organization CNN which has used it successfully thus far to report on tornadoes and other natural disasters.

For journalists, drone technology is slowly taking off, but not without restrictions and evolving policy. Drone journalists have an equal commitment to the ethics of reporting when it comes to newsworthiness, safety and sanctity in public spaces.

If someone asked you to think of a drone five years ago, you’d probably conjure up in your head an image of a military-like, aerial robot, programmed for top-secret military attacks. You probably wouldn’t visualize a young mother flying one with her child capturing cute images of a duck pond. Today, the word “drone” is incredibly loaded, but in a different way because it’s become a new sector of consumer technology. And like any other consumer technology, comes user responsibility.