The advent of the touchscreen has dominated our lives; it’s time for our accessories to climb out of the digital-stone-age to embrace the coming era. You know what I’m talking about… WEARABLES!

Information about the world at large, and almost every tiny detail of our individual lives, is literally at our fingertips – but now, we want to get it out of hand, meaning, we don’t want to have to hold it anymore. Here are some companies doing just that – freeing us from the need to use one of our most complex limbs for one of their most basic of functions: holding stuff.

Tech Fashionistas and digital hipsters were given a chance to glimpse into the future during Paris Fashion Week, where they were introduced to the much hyped-up Apple Watch. The watch was shown off at a high-end Paris boutique called Colette, effectively being seen by the public for the first time since its unveiling by CEO Tim Cook earlier this September. Although eager Apple-zombies were not allowed to put their hands on this shiny new toy, they none-the-less flocked to press their enthralled faces up against the glass display and feast their eyes on Apple’s newest innovation.

WHAT? A digital watch that works with iOS 8. It displays messages, Facebook updates, simplified apps and even give access to Siri, removing the automatic compulsion to reach for your phone as often – although, you will probably still have to fight this learned behavior. WHEN? Currently slated to come out early 2015 HOW MUCH? Starts at $349

Are you totally obsessed with staring at your phone? Or maybe just gazing at it when it doesn’t even want your attention, wondering why nobody has messaged you? Do you find yourself compulsively enslaved to checking for notifications every five minutes or so? I challenge you to imagine how much free time you’d have by the end of the week if you were to stop doing this. If you’re looking to get out from under the boot of subjugation by notification, you’re in luck – Mota’s Smart Ring is here to save the day, looking stylish and discrete as it does so. It subtly alerts you to calls, texts, and social media with vibrations from your finger, serving up real-time pushes from all your favorite digital-ego powerhouses like Instagram, Facebook, and Twitter. Show your affinity for the Dark Side, or Light Side if you prefer, by snagging one of their two aesthetic options – midnight black or pearl white. So go do something else with your hands, eyes and brain and quit checking your phone so much – the Smart Ring will let you know when your attention is required. Cry “Freedom!”

WHAT? A ring with a digital interface that allows you to observe alerts to calls, texts, and social media (Instagram, Facebook, Twitter) with vibrations from your finger. WHEN? Estimated delivery April 2015 HOW MUCH? Currently being Kickstarted, a donation of $75 will get you one ring to rule them all – no trip to Mt. Doom required! 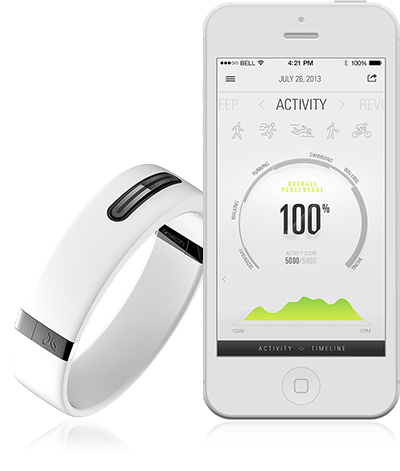 Looking for an activity tracker and work-out aid that does more than just count steps? Meet Jaybird’s Reign Band. The tech developer is calling the Reign “the best activity tracker in the industry,” but we won’t know for sure until reviews start rolling in after its release at the first of November. The Reign isn’t only meant to be a tracker, but a digital motivator as well, cataloginghow and when you get more active over time. It will even try to help you maintain healthy sleeping habits – which we all probably need some assistance with. The device itself shapes to your wrist using soft, seamless premium materials, offering eight interchangeable size options.

WHAT? An activity tracking wristband that is complimentary to active and sporty lifestyles, compatible with iPhone and Android devices. WHEN?  November 1st, 2014 HOW MUCH? $199

I have to say of all the things on this list, I’m most excited about the Myo; Ontario-based Thalmic Labs is really hitting the proverbial nail on the head with this device. The form-factor itself is not totally convincing, but the application of the device is inarguable. For every starry-eyed nerd that ever watched Tom Cruise manipulate digital user interfaces in Minority Report with just the wave of his hand (face it… everyone wants that), Myo is here to deliver on that promise of future convention. It disregards the need to be recognized as another object (watch, etc) and goes halfway up your arm, staking its claim on that otherwise unspoken-for territory. By using archetypal hand-gestures, the Myo translates the electrical signals being stimulated in your muscles into digital commands. Still not impressed? You’ll totally look like you’re using The Force. It comes in technology-standard Darth Vader black, or, Storm Trooper white, if you’re into that sorta thing… Okay, stop throwing your money at the computer – that still won’t work (yet?). I know you want to see it in action; go forth ready to have your mind blown.

WHAT? An armband controlled by electrical activity in your muscles. Wirelessly control your pc, phone and other digital devices with the wave of your hand. SO MINORITY REPORT. MUCH THE FORCE. SUCH WOW. WHEN? So it’s not currently available… but you can pre-order it right now for $150. The final production units will ship after the Myo developer kit, which is available at the same price. HOW MUCH? $150 is such a paltry investment for something that could be the next major leap forward in the transhumanism movement.

The wearables revolution is being pushed slowly, the major pioneer being Google with their Glass, but now that Apple’s in the game, it’s sure to become a battlefield of competent competition and there’s no knowing what other challengers will appear. While the concept of wearables might be simple, the technology required to execute those ideas is incredibly complex because of the target size, which makes research and development take a lot longer than we, the ones waiting impatiently to slap future tech onto our wrists, might like. Digital accessories are only the beginning of an inevitable crescendo into the future where technology and humankind physically merge… stay tuned for the next Fashion vs Tech article where I discuss… cyborgs! I leave you with this excerpt from an interview with Steve Mann, the first cyborg and father of wearable computing, where he offers a a prophetic answer to the question,

WILL WE ALL BE CYBORGS SOON?

“It’s kind of obvious that everyone is moving along that trajectory. What I envisioned back in the 1970s was this thing you would wear as “glass” over your right eye, and you could see the world though that glass. The glass then reconfigures the things you see.” – Steve Mann