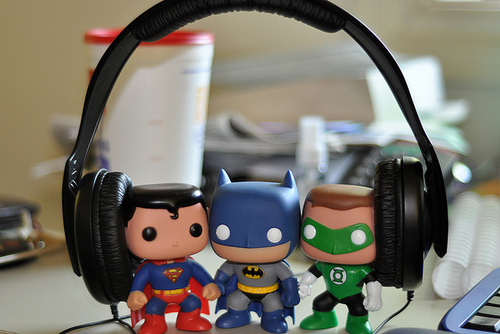 How do you listen to your music? Here are five great music apps to download for both iOS and Android

It’s quite possible that man first stumbled from his prehistoric cave pounding two rocks together, keeping time and whistling a tune he heard from one of his more deadly neighbors… ok maybe not, but we do know that music has had a big impact on people. Throughout history, humankind has used music to enlighten the soul, calm the savage beast, and woo potential mates. Music is the universal language that brings people together everywhere and anywhere in the world, and is one of the central ways we express ourselves and share our stories. Here are some of our favorite apps and online services that help us share and enjoy our music in the best ways possible. 1. Pandora

Pandora is an intelligent streaming music service that acts like a smart radio. It’s fast and easy to use, simply select an artist or genre and enjoy its personalized radio service. It has a huge library to tap into, and curates playlists for you based on a super-simple thumbs up-or-down rating system. The only drawback to the service is that it’s limited to the US only—making it impossible to share playlists with family abroad.         2. Spotify

Spotify is another online streaming music service that’s internationally accessible. For $15 a month, users have access to more than 20-million tracks, and can make playlists, share them, and upload them to their mobile devices. Thanks to its advertisers, non-premium app users can also have the service for free, although it has restrictions on how much music you can listen to.   3. SoundCloud

SoundCloud is a free audio platform that allows musicians to easily and conveniently upload their musical creations. Not only that, but you can record directly onto the site, share and promote your tunes. It streams nicely from any mobile device, allows users to comment on specific parts of the song and message each other, making it one of the most interactive music apps out there. The downside? You’d think you could edit your music on this app too, but unfortunately not. Let’s hope SoundCloud starts developing a built-in-editor to maximize this otherwise fantastic music app!   4. BeatsMusic

This app got a lot of hype, not only for being endorsed by one of the world’s most influential rap producers, but because it promised to personalize the music discovery process like never before. On the second day of its release, it was experiencing so much traffic that it had to limit how many people they were letting in! BeatsMusic intuitively learns what your tastes are, and has highly personalized, curated playlists overseen by Trent Reznor, the man behind Nine Inch Nails. It’s early in the game, but we’re keeping our eyes open to this growing music app community.   5. Band of the Day

This is a great app for music lovers who love discovering new artists, genres and sounds. Primarily made up of indie artists, Band of the Day seeks to uncover new and emerging talents. With consistently high ratings and a beautiful design interface, BOTD does have some cons, predominantly that there are some missing genres in its arsenal. Also, it only stores a month’s worth of music, unlike many other apps and services that have huge library to choose from.
Share on FacebookShare on Twitter
Tags: apps, Band of the Day, Beats Music, music apps, Pandora, Soundcloud, Spotify