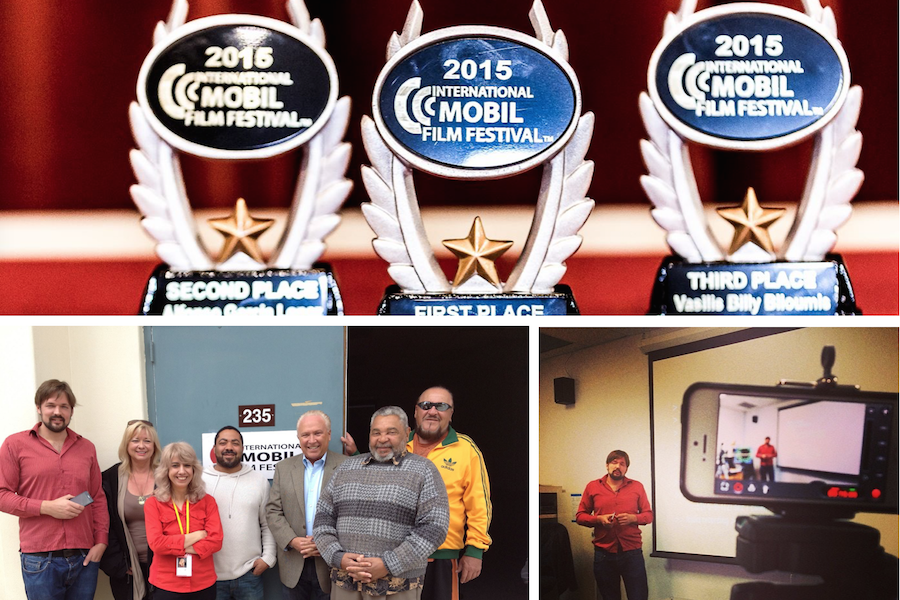 A few weeks ago, we got a call from an emerging group in mobile filmmaking, out of the blue. They’re called the International Mobil Film Festival and they’re making waves in the international indie filmmaking scene. Susan Botello is the founder of the International Mobil Film Festival and SBP Productions. Located in San Diego, she’s had a successful career in the film industry for several years before turning her attention to the mobile world. One day, she had an epiphany when she was watching the news. “I had this realization when I was watching the TV that they were taking media from citizens,” Susy said. “A lot of content was from citizens. It’s like mixed media, from journalists and citizens.” One reporter in a newscast in the middle east was using his Blackberry to film a report when the smoke in the area obscured the satellite for the feed. “I thought if the news is going to be doing this more and more, I’m sure this is good enough to do documentaries and movies,” Susy said. “I got excited.”

WATCH: THE OTHER SIDE by Conrad Mess, filmed with an iPhone 5.

Susy got her first big break at ComicCon years ago when she handed out cards to those who would be interested. Since then, her organization has grown into an international community. One of the first people to reach out to her, Vesna Ristovska, all the way from Macedonia. She’s been part of the team ever since. “The pioneers were so ready to partner up and make it grow. It made a community that knew each other and heard of each other. There were many obstructions at first. Promotion was difficult in a day before high-quality online video, limited smartphone capability and also people’s attitudes about filmmaking with a phone.  Susy held back several years until video quality was high enough and it wouldn’t detract from the value of the filmmaking.

Mobile video by @MaxMobile with leibo.net // Mobile music by Karen Curley // Filmed on iPhone 4 with mCAMLITE, mobile video created with Time Piles app, edited with Splice app and music produced with iMaschine app. “When you bring it online, it’s just a website. So I just waited for the videos to get better. If you really work your ass off on a film, and you struggle through it, and you get to this place and you’re walking on the red carpet and getting interviewed, then that’s a reward,” she said. The organization calls for entries for their 2016 contest taking place next year. Eventually they will form a Mobile Film School with courses and workshops with the goal of teaching everyone about the powerful future and techniques of mobile filmmaking. We’ll be getting an exclusive Q&A from Mobile Filmmakers Conrad Mess and Max Schleser, two stars of the organization who are pushing the boundaries of smartphone filmmaking.
Share on FacebookShare on Twitter
Tags: Conrad Mess, filmmaking, indie filmmaking, Max Schleser, Mobil Film Festival, mobile filmmaking, Susan Botello