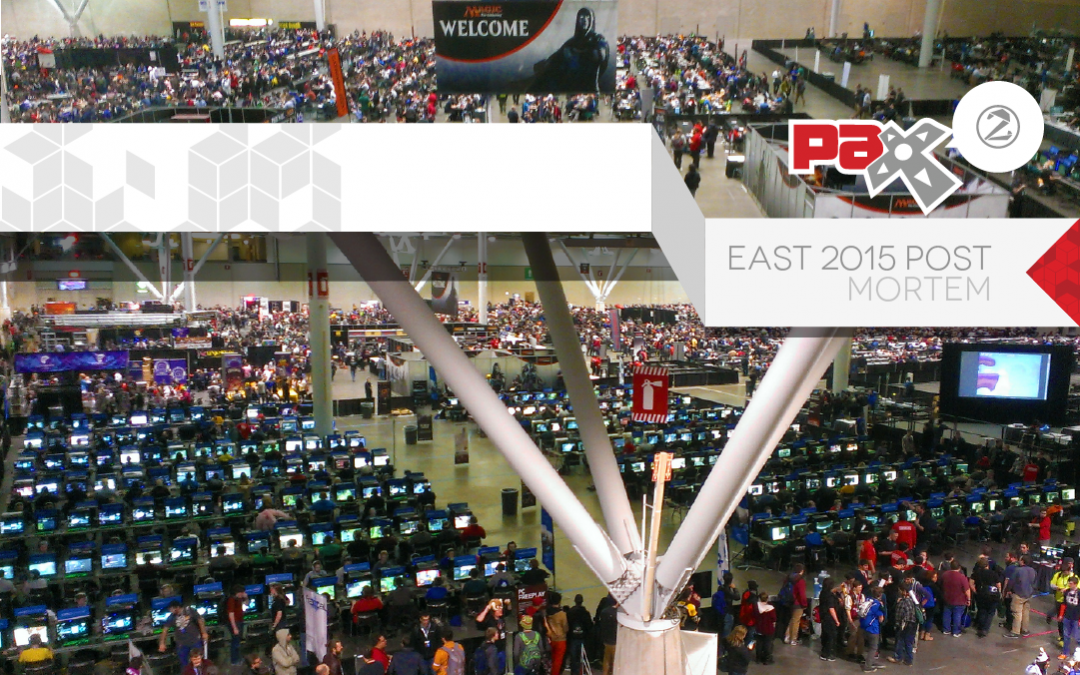 Once again I have survived the frozen wasteland of Boston to attend the jungle they call the Penny Arcade Expo. Neither illness nor snowstorms can stop me!

My eighth PAX is in the bag, and my toughest so far. On my flight to Boston I got hit with allergies intense enough that my sinus headache didn’t dissipate until I returned home to Florida five days later. But I persevered, and was able to witness PAX from a different perspective than I’d ever been given before… that of the booth girl. Of course I still caught some panels, walked the show floor, met developers and streamers, but mostly I talked to some 800+ people about a new technology they need in their lives. In lieu of telling this story 9,000 times, here’s my recollection of PAX East, from between allergy meds and alcohol.

Planes were going off icy runways, snowstorms were grounding passengers and airports were shutting down across the country. Yet somehow I managed to make two flights and find myself in Boston’s arctic tundra. The snowbanks were over five feet high. It was 27°. I’m Floridian. Anyway, I was smart enough to buy a parka and couldn’t stop being proud of myself for it, especially when I was trekking across the dark, freezing streets of Cambridge at 8 o’clock at night to the Made in Mass party. MiM – an event for Massachusetts-based start-ups to demo games to a more private crowd the day before PAX.

Normally, Fridays are pretty busy at a PAX – but it’s the Saturdays that are notoriously wild. Yet as Friday went on, I had the unmistakable feeling that three days had already gone by. I was literally exhausted. I talked to probably 200 attendees while working at the SkreensTV booth, ate a pretzel more swiftly than ever before in my life, suffered through an intense headache, and traveled back and forth to my hotel multiple times before I was finally able to breathe easy and sit calmly… in a line… with about 900 people. What was this line for you ask? To see a new game from a huge publisher? Not even close… Every PAX the reviewers of Giant Bomb hold a loosely-game-related panel that runs from about 9pm to 11 – but if you don’t get in that line at 7pm, there’s a good chance you’re not getting in to see the panel. You may be wondering just what exactly the draw is of said panel, which has little to do with actual gaming; I’ll tell you: Giant Bomb is a shining beacon of journalistic integrity in an industry that is corrupt, twisted, and basically up its own butt – Game Journalism. Because of their tried-and-true honesty, GB’s users have utter respect for this team of quirky editors, who, more than anything, are dedicated wholly to entertainment.

To say that I could relate to a zombie on Saturday morning is an understatement. Even though I arrived two hours late to the convention center, the line to get in still contained almost a hundred people… yes, it was definitely Saturday at PAX. This day alone I had about 350 conversations, and by the last hour of the event (5pm) I was starting to lose my voice in earnest; I kept talking to people anyway. The dense, swirling mass of people extended to every open corner of the show floor, out into the corridors, across several different floor levels and into smaller rooms – almost every exposed electrical socket was in use by con-goers who forced themselves to take a moment to recharge. The phone service was terrible and the internet – both the wifi offered by the center and 4g – was even worse.

All the most desirable panels tend to happen on this day and trying to schedule catching them can be a real hassle with all the overlaps, but I only decided to witness one this year. I took a break about midday to attend a panel held by Twitch streamers, “AS SEEN ON TWITCH: So you want to be a livestreamer?” The line outside the room filled up quickly; apparently, everyone wants to be a livestreamer. I myself wish to foray into this field professionally. The panel was incredibly insightful, but the resounding message which it imparted to the audience was beautiful and unique – “Just be yourself!” – something you almost never hear as advice for achieving professional goals.

In direct relation to the previous paragraph, one thing was newly apparent to me from this PAX – livestreaming is taking over, and has already completely changed the industry. The year prior, I can’t recall hearing anything about Twitch or streamers even once, yet from 2014 to 2015 this niche market of entertainment has blown up exponentially. I met people who stream as a hobby, and those that stream professionally, waking up every day on their own schedule before playing games for paying fans well into the night; yes, streaming is some peoples’ only job. Many wonder, what’s the fun of watching other people play games, isn’t the whole point to play them yourself? You’re not alone; the existence of such a market at first baffled me, but now I completely understand the desire for this type of entertainment – and why it is thriving. Livestreaming allows viewers to choose their content and their level of engagement – as many streamers actively participate in conversation with their viewers, even going so far as to take a consensus on what the next move they take in a game will be. Fans can avoid commercials by paying subscription fees to their favorite streamers or buying a Twitch subscription – but further steps can be taken when bestowing affection upon these entertainers, such as PayPal donations and things like drawings, fanmade games featuring the likeness/concept of the streamers, or a multitude of gifts. And you can stream just about anything – card/board games, podcasts, even cooking!

I was able to see a Q&A from my favorite streamer/YouTuber, Markiplier. Truth be told I wasn’t going to miss it, especially since I found out I had been absent during the one he participated in on Friday; there was no way I wasn’t going to be at his own panel today. Even though I have only recently begun watching streamed games at all, Markiplier immediately hit a cord with me… he is boisterous, animated, and honest. Watching him play and listening to him commentate is genuinely fun, and his manner of interaction – though not directed towards a chat audience – is so spot on that I literally feel like I’m in the room playing games with him. He currently has nearly seven million subscribers on Youtube, and almost TWO BILLION views on his videos – I hope that’s blowing your mind right now because it should be. People trying to get into the line to see him were surprisingly adamant… it really felt like Mark was some kind of big-time Hollywood celebrity. I was one of the last few able to stay in his crowd, as this Q&A took place right next to the entrance/exit and inconsiderate fans were blocking the stairs and escalator with abandon – a team of enforcers had to be called in and literally had to throw people out of the crowd every thirty seconds for this ENTIRE hour+ panel because the fans were causing a potential fire hazard. I’m a fully-grown female, but there were children as young as seven jumping up and down just to catch a glimpse of Mark’s famous hair. The panel turned out to be mostly superfluous, considering that it relied on a line of inquiry put forth from the questionable intelligence of fans, but all that mattered in the end is that I got to see Mark. And yes, he is a real person.

Is PAX fun? Of course it is. It’s probably more fun for most other people besides me though, as no matter what, I spend most of my time working – either at booths, hauling across hallways to catch panels, or shaking hands with developers and networking with everyone I meet. This might have been my most enjoyable PAX; I made some friends I intend to keep for a long time, and saw into a potential future for myself, different than any I could have previously imagined. I learned a lot about what is emerging in the industry, and as always, I’ll be going again next year. I may even attend PAX Prime 2015 in the coming fall.  PAX is hard; East 2015 was the hardest I’ve ever endured, but I’m proud of myself for surviving another round and looking forward to the prospects further PAXes now hold.

Sayonara Boston… I’ll see you next year for PAX East 2016.