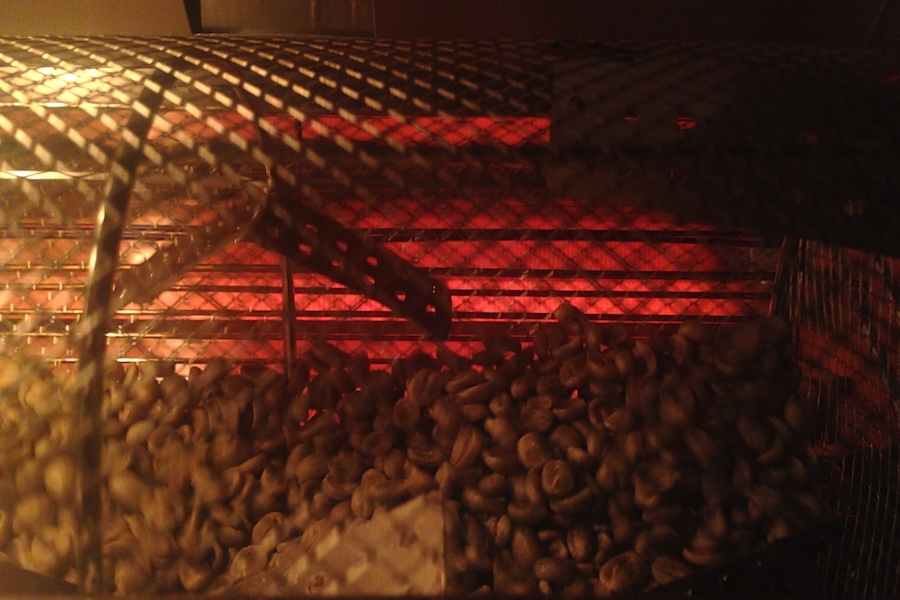 Welcome to the fourth installation of the Powered Labs coffee brewing saga: the time for java is nigh.

Time did in fact run out and needed to be added, and of course the ERROR MESSAGE did pop up on the screen reminding us the roast was in jeopardy. Not to fear, the start button was pressed in time and tragedy was averted. It was about this time that the coffee began to pop. Actually it had starting to fully pop before the timer went off. Now the popping was supposed to go on for about five minutes give or take, beginning slowly and building to a crescendo, so time once again became a concern/factor.

You may notice a trend here. Time has become an enemy, which we need more of and it as always was in short supply. The plus button was pressed again and again till it maxed out adding about two plus minutes. Will we reached the elusive second POP!! Not one soul knew…

The Beast looks into the mouth of the Behmor Gourmet 1600 Plus Roaster, searching for answers.

Two minutes to go in extra time and still no second pop.

Then a friend heard it. The faintest of sounds, barely audible, like sizzling bacon. No popping but sizzling.

We did not know what it was supposed to sound like, but we knew it should only be roasted for a few seconds max during the second pop, something like ten seconds, so we had to act quickly. We had to guess. Staring at each other thinking the other would know the truth. Neither did, so we guessed. we seemed to guess correctly and did not make sludge this day. The coffee was cooled for about 10 minutes and removed from its metal cage. Chaff from the spent beans were caught by the windy night and took flight. The contents of the metal cage reminded me of being a child again and opening that present which brought so much joy. It’s a feeling we do not have as often as adults, and the smell was intoxicating. I wanted nothing more than to grind it right there on the spot and brew a fresh cup, but alas no. I and the staff would have to wait days to taste this new offering.

As reality came spiraling back into the present, I tried to clear the chaff that was trying to invade my olfactory and remind myself that we had to wait a minimum wait 24 hours to brew this batch, while many roasters call for at least two days +. Anticipation SUCKS. all this time roasting and years of waiting to have this moment and now more waiting. Remember that whole holiday thing and waiting to open my gifts as a child and how it made me feel like a kid again that is true, but this time I was the spoiled, whiney child and not the joyful angle of my youth. AAAAHHHHHHHH I WANT MY COFFEEEEEEeeeeee!!!!!!!!