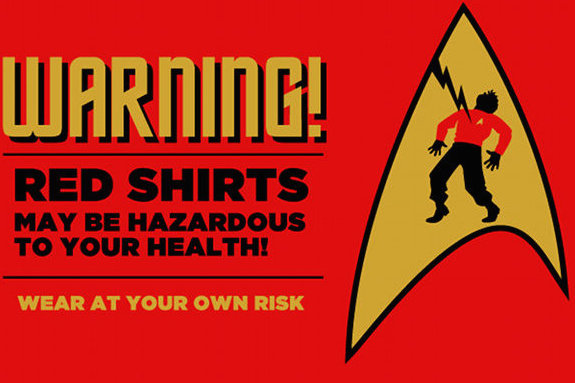 Powered Labs has initiated another member and the Red Shirt torch has been passed.

The Red Shirt life is a hard life. The cat poop must be scoped, the mop must be used to clean up the tribbles, and sometimes the Red Shirt gets shot by a phaser. In the end it’s all worth it, well, unless he gets killed. As long as that doesn’t happen, the Red Shirt will solidify himself as another member of the Captain’s crew and embark on the voyage of a lifetime.

THE CEREMONY The static air sat flat against the new recruit’s face. Beads of sweat formed and then dripped down onto his plain non-red t-shirt. Emperor Taylor emerged from the shadows of the dimly lit media room and brought with him the Red Shirts of old, Dan the Brewer and Olivia the Gamer. Each carried a company lightsaber much in the same way they carried their pride for Powered Labs. The Captain rang the bell and the ceremony commenced.